Where are you visiting us from?
Please select your region from the menu below to ensure our content is relevant to you

New £20 note looks beautiful, but can you count it?

New £20 note looks beautiful, but can you count it? 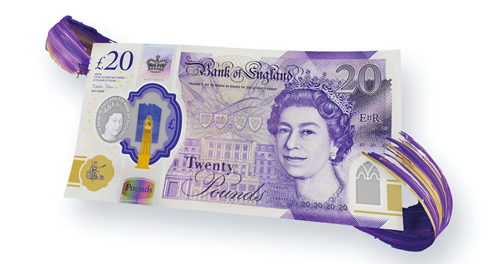 The Bank of England has unveiled its new polymer £20. Like the £5 and £10 polymer notes introduced in 2016 and 2017, the new £20 note promises to be more durable, cleaner and more difficult than its paper equivalent for forgers to recreate.

The new note features JMW Turner’s self-portrait from 1799 against a backdrop of one of his most famous paintings, The Fighting Temeraire, which played a distinguished role in Nelson’s victory at the Battle of Trafalgar in 1805.

Measuring 139mm by 73mm, the polymer note is noticeably smaller than the paper equivalent, which is expected to remain in circulation for between six and twelve months following the release of the new note on 20 February 2020.

For anyone who needs to manually count cash at speed, a continuing bugbear might be that the new note has the same slippery and somewhat unmalleable texture as the lower denominated polymer notes, making a manual or mechanical device cash counting operation even more onerous and prone to miscounts than before and thus making count-by-weight technology even more attractive for the UK marketplace.

“The introduction of the new £20 note undoubtedly creates a prompt for businesses to review their cash handling processes, especially those organisations that have started to realise that they are spending too much time and valuable resources counting and recounting cash by hand. These businesses have a fairly strong incentive to seek the automated accurate solution that we offer. 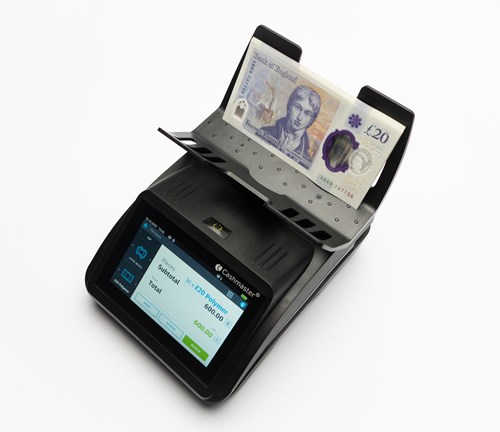 “The entire Cashmaster One range has been future-proofed and calibrated to reliably count the new polymer notes. Our premier device, the Cashmaster One Max, is the most popular product in the UK. Like all our devices, it counts cash six times faster than manual counting and also offers a range of built-in enhanced functionality options including simple integration with client POS systems. We know from our global reach and customer feedback that no other device offers such an advanced and future-proofed reliable cash counting solution in its category.”

Countdown to the release date

Existing Cashmaster customers will be offered a calibration file for their current machines well in advance of the release of the new note next year, with many businesses taking the opportunity to trial the Cashmaster One Max.

“Our customers can be confident of 100% count accuracy,” says Martin Petersen.  “Whether they are counting polymer notes or combinations of polymer, paper and coins, our customers will achieve an accurate till count in under one minute.” 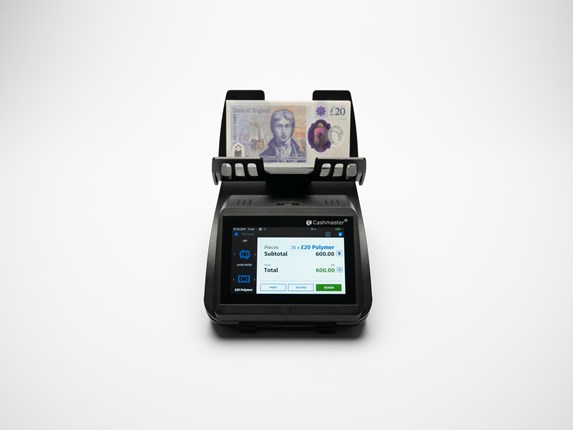 Security features of the new note

According to The Bank of England, the new polymer notes remove many concerns regarding counterfeits. It says that they are much more difficult to forge — for the £10 note, for instance, the rate of fake notes detected dropped from 2,500 per month for the paper note to just 50 after the introduction of the polymer version. Furthermore, even stronger security features such as a double clear window, coloured foil and raised print have been added to the new £20 note, reducing the problem of counterfeiting further: Good news for retailers, restaurants, other outlets and, of course, the public.

For more information on the security features and design of the note, visit  the Bank of England website.