As more restaurants go cashless, a backlash is building, especially in the nation’s capital, where an increasing number of fast-casual eateries are only accepting credit or debit cards and mobile payments, USA Today reports. Sweetgreen, a national chain, doesn’t accept cash at most locations, including its Washington, D.C., unit, while Menchie’s, Barcelona Wine Bar, The Bruery, Jetties and Surfside in the District also refuse cash payments.

“By denying the ability to use cash as a payment, businesses are effectively telling lower income and younger patrons that they are not welcome,” said D.C. Council member David Grosso, who has introduced a bill that would require retailers to let customers pay in cash. Chicago didn’t pass a similar bill last year, and Massachusetts has a 1978 law on the books that’s for cash payments but it hasn’t been enforced regularly, according to the state retailers association.

The realization that cash plays an important part in business, the economy and society as a whole is increasingly taking hold of the cashless narrative. The choice to pay by cash is made for many reasons: privacy, convenience and sometimes, for the most vulnerable members of society in particular - need.  Maintaining choice seems to be good for all. 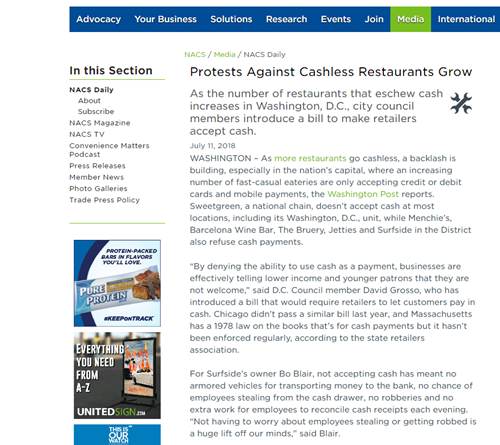