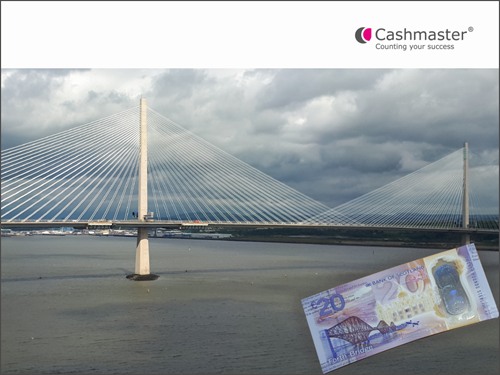 The new polymer £20 note, unveiled by the Bank of Scotland, will continue to feature the portrait of the Scottish novelist and poet, Sir Walter Scott, alongside the image of The Mound in Edinburgh. The reverse side will show an updated image of the Forth Rail Bridge (a UNESCO world heritage site) against a backdrop of the Forth Road Bridge and the recently opened Queensferry Crossing.

The Bank of Scotland, which has been issuing bank notes for 320 years, stated that the new note will be released early in 2020.

Like the new polymer £20 from the Bank of England, unveiled last month, the Scottish note has enhanced security features. These include an anti-counterfeit ‘window effect’ which can be found in the image of the Bank’s building on The Mound, and a holographic depth stripe. Additionally, the top of the foil features a Northern Lights effect when tilted; and the clouds adjacent to the goddess Fame will move left to right when tilted east to west.

The Bank of Scotland polymer notes are all part of The Bridges series, with each denomination featuring a a different bridge in Scotland:

A limited number of commemorative notes featuring a solus image of the Queensferry Crossing, the longest three-tower, cable stayed bridge in the world, will also be issued. This commemorative note will be marked with ‘QF & QC’.

“Our business is headquartered just a stone’s throw from the Queensferry Crossing. Many of our staff travel along it or see it on a daily basis as they cross the river on their way to work, so it's close to our hearts. The Bridge really is a magnificent structure and it’s wonderful that the Bank of Scotland chose to celebrate its completion by depicting it on the new note.”

The new note has the same dimensions as that from the Bank of England: 139 x 73mm compared to the current 149 x 80mm. Martin Petersen, Group Technical Leader at Cashmaster International, said:

“The texture of polymer notes from both the Bank of England and Bank of Scotland are somewhat slippery, making manual cash counts even more onerous and prone to miscounts than before. However, the entire Cashmaster One range of cash-by-weight counting devices is already calibrated to reliably count the new polymer notes. Our customers will continue to be able to perform an entire till count in under 60 seconds regardless of the combination of cash in the till drawer – polymer, paper, coins – Cashmaster will handle them all with supreme ease. "For customers with other Cashmaster models, we have a quick and easy-to-install update file so that they can be ready to count the new notes when they come into circulation next year."