Hong Kong 25 October 2018 - The Hong Kong business community gathered at The Hong Kong Club for lunch which was then followed by lively discussion during the increasingly popular Annual Economic Debate, an event sponsored by Cashmaster for the 3rd successive year.

Following an opening address from Andrew Seaton, Executive Director of the British Chamber in Hong Kong, Cashmaster Chairman Malcolm Offord extended a warm welcome to all guests which included representatives from customers of Cashmaster.

In his address, Malcolm summarised the progress that had been made by Cashmaster in the last 12 months across APAC, and he was especially pleased to confirm that new customers had been secured in Taiwan and Singapore. He then added that to help realise the growth prospects in each territory, a search was underway to identify new channel partners in each of these regions.

Malcolm then commented upon what he perceived as frequent one-sided PR commentary that predicts a ‘cashless’ future for Hong Kong and surrounding regions. He added that Cashmaster had a long history of operating in many global markets where the introduction of digital and credit card payment facilities had provided consumers with an extended range of payment options, but in most of these markets, which include the UK, most of Europe, N America, and Japan, there was more cash in circulation than ever before—and cash payments remained a very popular means of payment.

Following these introductory remarks, guests enjoyed a pleasant lunch in fine surroundings before being entertained to a lively discussion and debate which was led by two prominent economists namely, Dr Jim Walker and Dr Simon Ogus. Each of Jim and Simon are respected for their wide-ranging knowledge of the Asian wide economy and guests listened carefully as they shared their views and predictions for the economic and political outlook in Hong Kong, China, wider Asia and other key global markets including the UK and Europe, and N America.

The discussion, which was expertly moderated by John Bruce, Managing Director of Hill & Associates, became particularly lively when various Brexit related possibilities were shared from the floor!

Andrew Seaton then brought matters to a close by thanking each of the speakers, and Cashmaster for their continued sponsorship and thanked all guests for attending the event.

Cashmaster are proud sponsors of the British Chamber of Commerce Annual Economic Debate 2018, hosted by the Scottish Business Group. 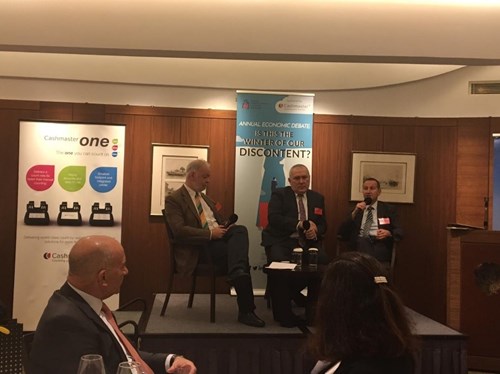 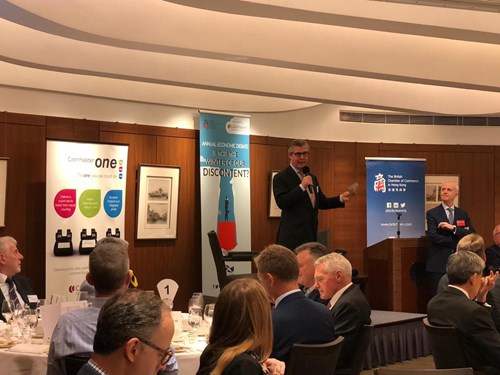